What excatly is all the rivalry and competition for? 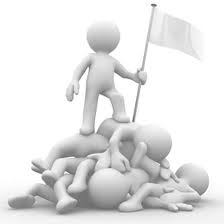 In the office,one staff wants to outshine others and even drag them down in the process. People go out of their way to be noticed as the 'star' not minding whose ox is gored. Some even plot ways to f**k the other up completely.
As kids, one sibling rats his/her sister/brother out on every little incident just so he/she can be known as the 'good child' at home. As grown ups, the sibling rivalry dosent end. It continues. Competition about who wears the nicest clothes, who dates the cutest guy, who has the more loaded boyfriend. even up till who gets married first.
Sometimes, competition is without bad blood, just something people do (for fun even!). Could be healthy when properly done. But most times, it is with so much ulterior motives and bad intentions especially the kind found in offices. Areas one is supposed to help the other to get the job done is ignored just so that one can make a fool of him/her self and be ridiculed.
Rivalry. You see it everywhere

This post was inspired by a thread i saw in this website i like going to www.wivesroundtable.net . A lady was asking what to do about her two kids (9 & 7) who were alsways competing against each other. I read through other people's comments and could relate 100% with them!
Posted by Amaka's Notepad at 12:55