Does pimples actually have a cure? 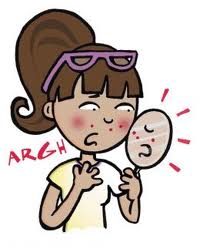 I went over to an interesting blog i just found out, naijabankgirl . she had just gotten the Stylish and Versatile Blog Award and had to say some things about herself. One of the 7 things she said was that she had had to battle pimples for a long time. I could relate so well with this!
I didnt start having pimples when my mates where having theirs - between the ages of 13 and 18. My pimple breakout started after i should have gotten past the adolescence stage! I started having the tiny annoying stuffs when i was almost 20yrs. My friends used to taunt me that i was having late adolescence. It was so very annoying. It made me so self conscious. You can imagine just meeting this real cute boy, hanging out with him for about 2days and on the 3rd day u wake up to find about 7 boil-like looking stuffs on your face with whitish thing like pus. Mehn!!! I used to feel so bad. I tried everything - Nixoderm, one funny smelling sulphur cream (have forgetten the name), cleansers containing benzoyl peroxide and salicylic acid, facial wash, different soaps, even tetmosol soap (tetmosol used to be so hot that if u bath with it as a woman, u had to be careful it dosent get into 'you-know-where', else u will dance alanta for the next like 1hour while exposing the affected 'area' to fan, AC and other cooling devices!!!)
Well, i did all the 'normal' stuff and even ventured into the 'not-so-normal' ones ; akanwu (potash) mixed with lime (that burnt the crap out of my face!), rubbing honey on my face (i killed an ant on my face that night and didnt try it again). Then the advises started coming in - 'Use early morning urine to was your face' (yuk), 'Rub close-up on your face and wash it after 1hr'. I didnt pay heed to any of these obsene advices sha. The height of the advises was 'Rub sperm on you face and ur pimples will be a thing of the past'!!! SPERM as in human male reproductive liquid SPERM!!! I almost slapped the silly girl's face. I just looked at her and walked away as calmly as i could muster, but not before i told her to help me tell her boyfriend to get me the sperm to use.(shio kelebe)
I sincerely think that pimples is a phase that will pass. Maybe a reaction to something or an imbalance somewhere. All i know for sure is that some how, i managed not to care what the pimples on my face were up to and then one day, i saw my face in the mirror and couldnt believe it. they had cleared! I still have occasional breakouts but nothing major.
Just try not to eat lots of oily stuff, wash ur face at night with mild soap- make sure u remove every makeup and oily stuff. In as much as the temptation is great, try not to burst the pimples on ur face ans this will now leave a scar as it heals. leave the rest. One day, the pimples them go tire to waka up and down ur face. If u no send them,dem go go find another person to take hostage, leave u. So babes, do not bother, if i can NOT have pimple issues now - YOU CAN TOO.lol

Lalalalala, it is friday!! My best day of the week. I am so so glad.

You all take care. XOXO